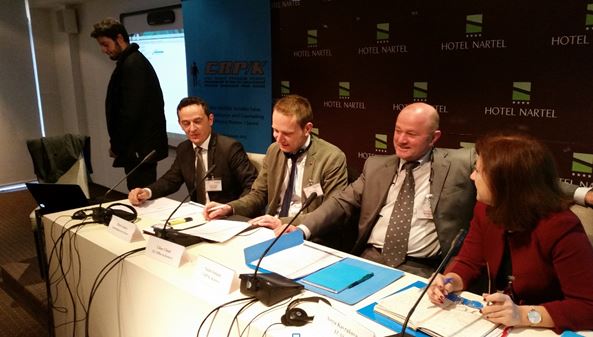 The Triple A Regional Conference, “Access to Justice and the Roles of CSOs in the Western Balkans and Turkey: From practice to policy impact” was held in Pristina from November 26-27th. The Conference was put on by ECAS and its local partners, Civil Rights Program Kosovo (CRPK) who are working together along with several others on the Triple A project.
Partners from throughout the Western Balkans and Turkey came together to discuss the situation of organizations who provide Triple A services (Access to Information, Advice, and Active help).

Looking Ahead: The Triple A Network and National Advocacy Campaigns

On the first day, the discussion was centred on two main pillars:

The Triple A Network and Quality Standards, the main goals of which are to:

The second main pillar was the upcoming advocacy campaigns in the 7 different countries of the Western Balkans and Turkey. The moderator of the session, Julie Bishop from the Law Centres Network, highlighted the main common points which came from these:

During the first day, we also heard from organizations working on the ground to support Triple A services: the Centre for Legal Aid and Regional Development (CLARD) in Kosovo, the Foundation of Local Democracy, and Vasa Prava, who are both from Bosnia and Herzegovina, all of whom had pilot projects in the first phase of Triple A.

The conference continued on the morning of the 27th with presentations from the new pilot projects in Macedonia, Montenegro, and Albania, which are sub-grantees of the Triple A project. These organizations will be doing advocacy work for a variety of causes within their country, including disability rights, inclusion of Roma without identification, using legal tools to example citizens from costly court fees, and more.

Refugees in Serbia, Macedonia, and Turkey

The second session of the morning dealt with the heavy topic of the refugee/immigration crisis and how it is impacting Serbia, Macedonia, and Turkey. As several partners in the project are involved with helping those remaining in or passing through their country, we thought this would be an opportunity to learn more about the challenges these organizations face and to see if there are possibilities to further help and support them.

Milan Antonijevic, Director of the Lawyers’ Committee for Human Rights (YUCOM), began the discussion by describing the political atmosphere in Serbia, explain that whereas in some countries, political parties have misused the crisis to their advantage, this is not happening in Serbia: “I rarely say this about the Serbian government, but their response has been very good.” He went on to explain, however, that there is still more need for support in the work being done on the ground, improving the facilities for refugees, and more.

Svetlana Kjoseva from the Macedonian Young Lawyers Association (MYLA) spoke next about the situation in her country. Macedonia currently has 5000-6000 new individuals arriving at their borders daily. MYLA is working with the United Nations Refugee Agency (UNHCR) by providing lawyers to those arriving, giving them the possibility to seek asylum in the country. They now also have interpreters which facilitates the job, as asylum seekers tend to be more comfortable speaking and explaining the problems they have encountered in their own language.

Lastly, through her presenation, Irem Somer from Mülteci-Der in Turkey sought to respond to the question: Is Turkey a safe place for Refugees? She answered with a resounding no, cautioning the EU that it would be a mistake for them to list Turkey as a safe destination for refugees for a number of reasons—poor living conditions for asylum seekers, limited access to the job markets, inadequate protection for vulnerable groups, and more. Shockingly, at this time only 40 people in Turkey have been granted refugee status despite the fact that there are over two million Syrians, Iraqis, Afghanis, and Somalis in the country; unfortunately, the rules only allow for people claiming asylum from Europe to be given refugee status in Turkey, leaving the overwhelming majority without proper recognition.

The Triple A project works to improve access to Free Legal Aid, Information, and Advice services in the Western Balkans and Turkey and to build the capacities of organizations providing these services in the region. In early 2016, advocacy campaigns will be launched in each country of the project: Albania, Bosnia and Herzegovina, Kosovo, R. Macedonia, Montenegro, Serbia, and Turkey. Further, a network for Triple A Service providers based on Quality Standards will be launched mid-2016.

This website uses cookies to improve your experience while you navigate through the website. Out of these, the cookies that are categorized as necessary are stored on your browser as they are essential for the working of basic functionalities of the website. We also use third-party cookies that help us analyze and understand how you use this website. These cookies will be stored in your browser only with your consent. You also have the option to opt-out of these cookies. But opting out of some of these cookies may affect your browsing experience.
Necessary Always Enabled
Necessary cookies are absolutely essential for the website to function properly. This category only includes cookies that ensures basic functionalities and security features of the website. These cookies do not store any personal information.
Non-necessary
Any cookies that may not be particularly necessary for the website to function and is used specifically to collect user personal data via analytics, ads, other embedded contents are termed as non-necessary cookies. It is mandatory to procure user consent prior to running these cookies on your website.
SAVE & ACCEPT